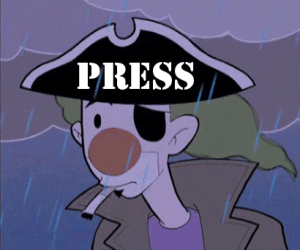 What is the source of the Village’s anguish?  The fact that they’re dealing with someone who is infinitely smarter than they are:

Q: Mr. President, thank you. In China, in Syria, in Egypt and now in Russia we’ve seen you make strong statements, issue warnings that have been ignored. Are you concerned that America’s influence in the world, your influence in the world is on the decline? And in light of recent developments, do you think Mitt Romney had a point when he said that Russia is America’s biggest geopolitical foe? If not Russia, who?

And Mr. Prime Minister, do you think these sanctions will change Vladimir Putin’s calculation, will cause him to back down? And do you see there’s a — where do you see a Russian red line, where if they go any further, if they go into eastern Ukraine, into Moldova, where options beyond sanctions have to be considered? Thank you.

PRESIDENT OBAMA: Well, Jonathan, I think if the premise of the question is that whenever the United States objects to an action and other countries don’t immediately do exactly what we want, that that’s been the norm, that would pretty much erase most of 20th century history.

I think that there’s a distinction between us being very clear about what we think is an appropriate action, what we stand for, what principles we believe in, versus what is, I guess, implied in the question, that we should engage in some sort of military action to prevent something.

You know, the truth of the matter is, is that the world’s always been messy. And what the United States has consistently been able to do, and we continue to be able to do, is to mobilize the international community around a set of principles and norms. And where our own self-defense may not be involved, we may not act militarily. That does not mean that we don’t steadily push against those forces that would violate those principles and ideals that we care about.

So yes, you’re right, Syria — the Syrian civil war is not solved. And yet Syria has never been more isolated.

With respect to the situation in Ukraine, we have not gone to war with Russia. I think there’s a significant precedent to that in the past. That does not mean that Russia’s not isolated. In fact, Russia is far more isolated in this instance than it was five years ago with respect to Georgia and more isolated than it was certainly during most of the 20th century when it was part of the Soviet Union.

The point is that there are always going to be bad things that happen around the world, and the United States, as the most powerful nation in the world, understandably is looked to for solutions to those problems.

And what we have to make sure we’re doing are that we are putting all elements of our power behind finding solutions, working with our international partners, standing up for those principles and ideals in a clear way.

There are going to be moments where military action is appropriate. There are going to be some times where that’s not in the interests — national security interests of the United States or some of our partners, but that doesn’t mean that we’re not going to continue to make the effort, or speak clearly about what we think is right and wrong. And that’s what we’ve done.

With respect to Mr. Romney’s assertion that Russia’s our number- one geopolitical foe, the truth of the matter is that, you know, America’s got a whole lot of challenges. Russia is a regional power that is threatening some of its immediate neighbors — not out of strength, but out of weakness.

Ukraine has been a country in which Russia had enormous influence for decades — since the breakup of the Soviet Union. And you know, we have considerable influence on our neighbors. We generally don’t need to invade them in order to have a strong cooperative relationship with them. The fact that Russia felt compelled to go in militarily and lay bare these violations of international law indicates less influence, not more.

And so my response then continues to be what I believe today, which is Russia’s actions are a problem. They don’t pose the number- one national security threat to the United States. I continue to be much more concerned when it comes to our security with the prospect of a nuclear weapon going off in Manhattan, which is part of the reason why the United States, showing its continued international leadership, has organized a forum over the last several years that’s been able to help eliminate that threat in a consistent way.

And with that, we have another great rejoinder to the thousands of Villagers, war cheerleaders, NeoConfederates, profiteers, America-is-in-decline-ers (as long as that one is in office, that is), and other sundry jackasses: Be still, an adult is talking.

Once again, the agency charged with protecting the president shows a (no longer) stunning lack of professionalism among some of its members:

Three Secret Service agents responsible for protecting President Obama in Amsterdam this week were sent home and put on administrative leave Sunday after going out for a night of drinking, according to three people familiar with the incident. One of the agents was found drunk and passed out in a hotel hallway, the people said.

The hotel staff alerted the U.S. Embassy in the Netherlands after finding the unconscious agent Sunday morning, a day before Obama arrived in the country, according to two of the people. The embassy then alerted Secret Service managers on the presidential trip, which included the agency’s director, Julia Pierson.

This, on the heels of the infamous Cartegena incident in 2012, raises some disturbing questions – questions that should be answered with all deliberate speed:

This incident is damning, and should be of concern to everyone regardless of party.  We’ll see…

Just when I’d sworn off reading anything concerning anybody with the last name Palin, here comes TBogg to draw me back in:

But is that enough Sarah Palin for God’s Chosen Country?

Actually, it’s probably too much, but tough titties America, because Sarah Palin is going to get her own teevee network channel called Rogue TV and it will be in your cable box in your house and there is nothing you can do about it.”

The Boggster is in rare form as he theorizes about a channel lineup:

“And what kind of delightful programming  might we expect on this new addition to the other eight-hundred channels you never watch??

Do yourself a favor and go read the whole thing – it’s as thorough a takedown of Grifterella as you’ll ever see.  Also, how sad is this:

(TLC’s parent company, Discovery Communications, is an investor in Tapp.)

Idiocracy was a documentary, evidently…

The recent political freakshow that is CPAC just wrapped up another successful outing (where “successful” = “numerous opportunities for those outside the 27% to say ‘What the *^%$ was THAT?”), and as entertaining as the various write-ups were (from Anne Laurie, Dave Weigel,  Charlie Pierce, and TBOGG, among others), it’s sad that the MSM takes this so seriously.  Of course, that batch of jaded Ferengi takes ANYTHING a Republican does seriously (which is why we get graced with Johnny “Remove yourself from my forward-facing landscape accoutrement” McCain each and every single week).  I did start to wonder how many people are actually watching the Sunday GOPer fest.  The answer surprised me:

This is a seriously older-skewing audience – to an even greater degree than I thought.  But those olds VOTE – and nothing gets these folks motivated to hit the polls like scaring the living Santorum out of them.  Thus, the scare-fest continues.